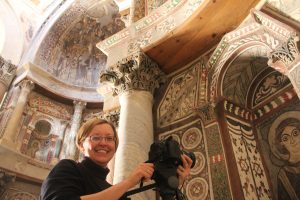 Elizabeth S. Bolman is Chair of the Department of Art History and Art, and Elsie B. Smith Chair in the Liberal Arts. She engages with the visual culture of the eastern Mediterranean in the late ancient and Byzantine periods. Professor Bolman is best known for her work in Egypt, in which she has demonstrated the vitality of Christian Egyptian art and a new understanding of the nature of artistic production there in the early Byzantine period. She edited and was the principal contributor to the award-winning Monastic Visions: Wall Paintings in the Monastery of St. Antony at the Red Sea (Yale University Press and the American Research Center in Egypt, 2002) and to The Red Monastery Church: Beauty and Asceticism in Upper Egypt (Yale University Press and the American Research Center in Egypt, 2016). This recent book is the product of over a decade-long multidisciplinary project that she founded and directed, which included cleaning and conservation of the Red Monastery’s spectacular paintings. She is the recipient of fellowships and grants from the Guggenheim Foundation, Fulbright program, National Endowment for the Humanities, Dumbarton Oaks, American Research Center in Egypt, and United States Agency for International Development.

A grant for the Vagantes!

We are delighted to announce that Professor Elina Gertsman (Art History) and Professor David Rothenberg (Music) received a $5000 grant from the Baker-Nord Center for the Humanities towards the Vagantes Conference on Medieval Studies! Today is the last day to send in abstracts for consideration -- we look forward...

The last of the talks in the series of St. Catherine's webinars was dedicated to the Sinai library. To watch the recording, click here.

WHEN: Friday, December 3, 2021 10:15 am-5pm WHERE: Gartner Auditorium at the CMA For the 2021 symposium, “Monumental Conversations: City Stories,” CWRU and the CMA are collaborating with Monument Lab, an internationally recognized public art and history studio that cultivates and facilitates critical conversations around the past, present and future of...

Congratulations to Professor Gertsman on the review of her Absent Image in the venerable Times Literary Supplement, where the book is lauded for its "wonderful novelistic sensibility"! Read it here!

Our first Medieval Reading Circle on November 19 was a great success! We learned many important things about divine love, ghosts, vengeful saints, and the dangers of consuming sage. We look forward to seeing you at our next reading circle during spring semester!

"Discerning the Artist's Hand: Machine Learning on Surface Topography" was published in Heritage Science. The article is the result of the collaboration between CWRU Physics Department and Department of Art History and Art.  The article is available here.

Reed O’Mara presenting at the Newberry

Congratulations to Reed who has been selected to participate in the 2022 Multidisciplinary Graduate Conference in Premodern Studies at the Newberry Library! Reed will present her paper, "The Language(s) of the Other: Pseudo-Hebrew & Yiddish in Fifteenth-Century German Broadsides," in the Redefining Community: Selfhood and Identity session. The hybrid...

On November 13, Professor Elizabeth Bolman and Professor Helen Evans, Mary and Michael Jaharis Curator of Byzantine Art Emerita, Metropolitan Museum of Art New York, gave the talk about icons of Sinai. The recording is available here. The last talk will be dedicated to St. Catherine's library and will be...

Free Public Lecture as part of a series looking at Lost Narratives: Materiality, Marginalization, and Women’s Agency in Museums. Mary Jo Bole: Recent Work.  When: November 19, 7.00 pm Where: CMA, Recital Hall Mary Jo Bole is currently an artist-in-residence in the Video/Film lab at the Wexner Center for the Arts. Bole has made her...

Graduate Association of Medieval Studies (GAMS) invites faculty, staff, students (undergrad and graduate) to join a Medieval Reading Circle on November, 19. WHEN: November 19, 7.00 pm WHERE: Bottlehouse Brewing  (2050 Lee Rd.) Bring along a medieval text to share and discuss over a glass of mead, or just stop by to...

We are delighted to announce a series of lectures in medieval art for spring of 2022. Some lectures will be held online, some -- in person. The details will be provided as the lectures approach. Achim Timmerman (University of Michigan), "Mnemotopes: Jerusalem and the Civic Imagination in the German Late...

We are very excited to be hosting this year’s Vagantes Conference in Medieval Studies here at CWRU and the Cleveland Museum of Art! The conference will be held from March 24–26, 2022. Activities will include an opening recital, a banquet, and various workshops. Keynote lectures will be given by...