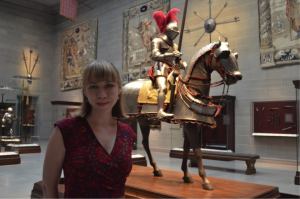 Dominique DeLuca is a specialist in medieval art, who received her PhD in 2020, after defending a dissertation that explored the images of shadows in fifteenth-century secular manuscripts,” In 2016, she published “Bonum est mortis meditari: Meanings and Functions of the Medieval Double Macabre Portrait,” in a volume edited by Albrecht Classen, Death in the Middle Ages and Early Modern Times: The Material and Spiritual Conditions of the Culture of Death, and contributed two catalogue entries to the Myth and Mystique: Cleveland’s French Gothic Table Fountain exhibition catalogue edited by Elina Gertsman and Stephen Fliegel. Dominique has worked extensively with objects and staff from the Cleveland Museum of Art. She was a curatorial intern in the Indian and Southeast Asian Art department where she was involved in the development of the 2016 exhibition Art and Stories from Mughal India and its catalogue, and a curatorial intern with the department of Medieval Art. In 2018, she participated in the Mellon Summer Institute in French Paleography at the Newberry Library, and was a recipient of the Etienne Gilson Dissertation Grant from the Medieval Academy of America. In 2019-20 she was a Mellon Fellow in the Department of Education and Academic Affairs at the CMA.

Kylie Fisher is a specialist in early modern Italian art. Her dissertation, partially supported by the Walter Read Hovey Memorial Fund scholarship from The Pittsburgh Foundation, explored the formidable role that engravings played in how ancient Rome was understood, imagined, and remembered in the sixteenth century. Kylie has held several museum internships, including one in the Department of Prints and Drawings at the Cleveland Museum of Art, where she researched the permanent collection of Italian drawings. She also worked as the IFPDA Foundation Curatorial Intern at the Allen Memorial Art Museum at Oberlin College, where she helped to organize the centennial show, A Century of Women in Prints, 1917-2017 as well as Lines of Inquiry: Learning from Rembrandt’s Etchings, for which she contributed to the exhibition catalogue. Kylie has presented her research at the annual conferences of the Midwest Art History Society and Sixteenth Century Society and Conference. Her article, “Drawing from Mantegna: Engaging with Engraving in Cinquecento Northern Italian Art,” was published in Athanor 35.

received her MA in Art History in 2020. She will be pursuing her PhD in medieval art at the University of Kansas with Anne D. Hedeman. Her research interests include representations of identity and otherness, and how markers of gender, sexuality, religion, and nationality inform medieval secular imagery. Her qualifying paper on medieval ivory won the Friends of Art Best MA Paper Award in 2020.  Mia has previously served as the Collections Management intern for the CWRU Putnam Sculpture Collection. In her spare time she enjoys painting, trying new foods, and attempting to train her various animals.

Erica Spilger received her MA in Art History and Museum Studies in 2020. Her interests include cross cultural exchanges of people, ideas, and objects, and the power dynamics at hand in the Spanish colonization of the Americas and Asia. Erica received her BA in Art History from Ohio University through the Honors Tutorial College. For her undergraduate thesis, she curated an exhibition titled “Expression and Repression: Contemporary Art Censorship in America” at the Kennedy Museum of Art in Athens, Ohio. As a CMA Fellow, she has worked with the museum’s photography curator Barbara Tannenbaum; her projects have entailed researching and entering data for new acquisitions, dating works in the collection, and writing fun facts about objects for the museum’s website.

Rebecca Woodruff received her MA in the Art History and Museum Studies program in 2020. Rebecca is primarily interested in examining the long eighteenth century through the lenses of material culture, reception theory, and social history. In addition to her current internship at the Cleveland Museum of Art, she has also worked as a curatorial intern for the Cleveland History Center’s costume collection and the Grand Rapids Art Museum in Michigan. She has also interned as a content researcher for Enfilade, the serial newsletter for Historians of Eighteenth-Century Art & Architecture, and she served as a co-chair for the 45th Annual Cleveland Symposium. Rebecca has presented a number of conference papers, including “Empathetic Confrontations: David, Kauffman, and Homeric Narratives” at the Midwest Art History Society in Cleveland. 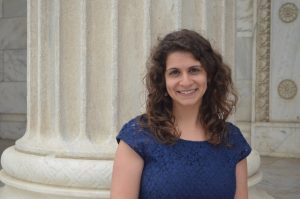 Julia LaPlaca received her MA in Art History and Museum Studies from CWRU in 2019. Currently she is pursuing a PhD in Late Medieval/Early Modern European Art with an additional interest in Museum Studies at the University of Michigan, Ann Arbor with Achim Timmermann.  Before arriving at CWRU, Julia co-curated an exhibition on Grand Rapids artist Jaro Hess (1889-1977) at the 106 Division Gallery in Grand Rapids (2016). During her studies at CWRU, Julia interned at the Cleveland Museum of Art in the textile conservation department and contributed curatorial research to textile and prints & drawing exhibitions at the CMA. She has presented her research at the Midwest Art History Society Conference. Most recently, Julia has conducted architectural surveys for the Cleveland Landmarks Commission while serving in AmeriCorps and worked as an instructor of Art History at the Cleveland Institute of Art. 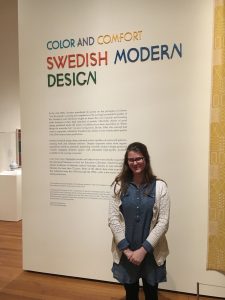 Kate Hublou received an MA in Art History and Museum Studies in 2019. Kate specializes in British, German and Scandinavian art and design of the long nineteenth century and is particularly interested in materiality, historic revivals, eco-criticism and post-colonialism. She has presented her work on Victorian eco-critical ironwork at the Nineteenth Century Studies Association and recently published an essay on the topic in SEQUITUR 6, no. 2. While in the CWRU program, Kate co-curated with Stephen Harrison, Color and Comfort: Swedish Modern Design – an exhibition proposed by the 2019 cohort of museum studies students. After graduating she was the Center for American Art Summer Silver Fellow at the Philadelphia
Museum of Art. Her research and writing from that fellowship will be included in the forthcoming volume of American Silver at the Philadelphia Museum of Art. Currently, Kate is Research Associate of Applied Arts of Europe at the at the Art Institute of Chicago.