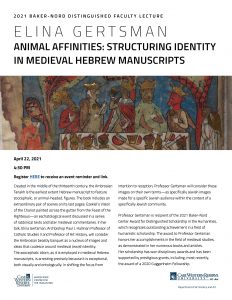 Created in the middle of the thirteenth century, the Ambrosian Tanakh is the earliest extant Hebrew manuscript to feature zoocephalic, or animal-headed, figures. The book includes an extraordinary pair of scenes on its last pages: Ezekiel’s Vision of the Chariot painted across the gutter from the Feast of the Righteous—an eschatological event discussed in a series of rabbinical texts and later medieval commentaries. In her talk, Elina Gertsman, Archbishop Paul J. Hallinan Professor of Catholic Studies II and Professor of Art History, will consider the Ambrosian beastly banquet as a nucleus of images and ideas that coalesce around medieval Jewish identity.

The zoocephalic idiom, as it is employed in medieval Hebrew manuscripts, is arresting precisely because it is exceptional, both visually and ontologically. In shifting the focus from intention to reception, Professor Gertsman will consider these images on their own terms—as specifically Jewish images made for a specific Jewish audience within the context of a specifically Jewish community.

Professor Gertsman is recipient of the 2021 Baker-Nord Center Award for Distinguished Scholarship in the Humanities, which recognizes outstanding achievement in a field of humanistic scholarship. The award to Professor Gertsman honors her accomplishments in the field of medieval studies, as demonstrated in her numerous books and articles. Her scholarship has won disciplinary awards and has been supported by prestigious grants, including, most recently, the award of a 2020 Guggenheim Fellowship.