Professor Elina Gertsman was elected a Fellow of the Medieval Academy of America. According to the MAA press release, it is the highest honor that the Academy can bestow upon North American medievalists.  Fellowships acknowledge scholars’ notable lifelong contributions to Medieval Studies through their scholarship, teaching, and service. New fellows are nominated by three colleagues and elected by vote of the Fellows. 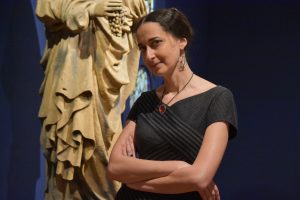