The 7th-century arrival of Nestorian Christianity, the Syriac form of Christianity also known as Church of the East, is recorded on the famous Nestorian stele erected in Xian in 781CE. Despite subsequent repressions, the religion continued to be practiced and, by the 13th century, had been firmly re-established in northwest China. This Mining the Collection episode provides a rare glimpse into a group of so-called Nestorian bronze cross 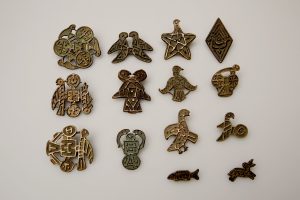 es, works cast in the Ordos region (modern-day Inner Mongolia) during the Yuan Dynasty (1279-1368) and featuring hybrid Christian and Buddhist formal elements. Part of the collection of the University Museum and Art Gallery of the University of Hong Kong, many of these plaque-like ornaments are cruciform in shape—hence the group description as “crosses”–-while others have stylized animal and vegetal forms. Dr. Florian Knothe, Director of the University Museum and Art Gallery, will discuss the material and functions of these objects as well as the history of the Nestorian church in China and its legacy.