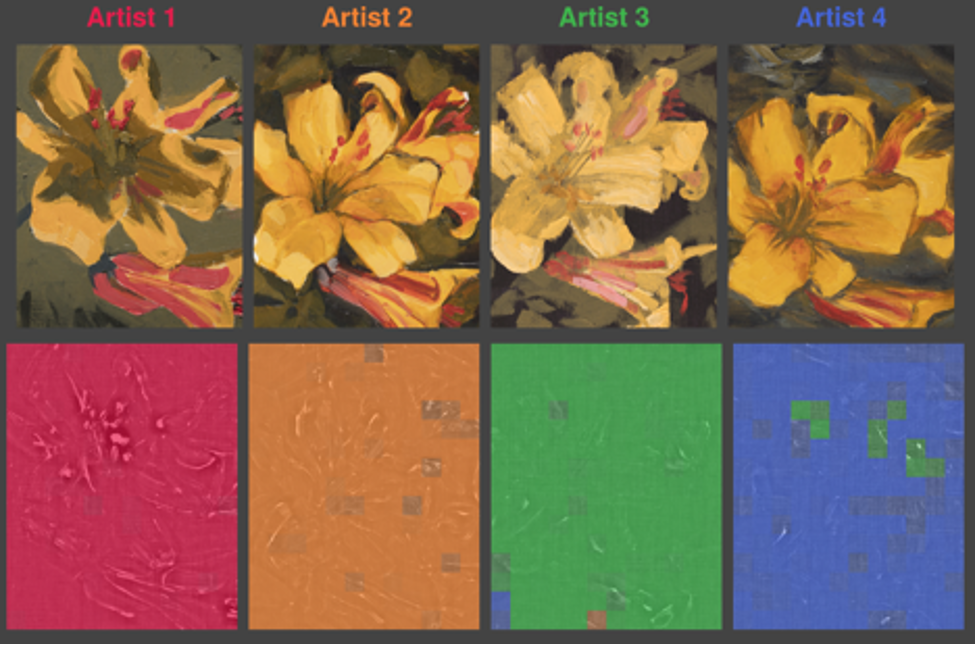 Factum Foundation has initiated a collaboration with a team from the Physics, Materials Science and Engineering, and Art History and Art Departments at Case Western Reserve University in Cleveland, Ohio.
The goal is to apply machine learning methods to surface profilometry images of paintings in order to attribute stylistic components of brushwork in some of the later paintings of El Greco, with the aim of exploring differences between the hand of El Greco, those of his son Jorge Manuel and his workshop, and later conservation interventions.
The team at Case Western Reserve has developed image analysis and machine learning techniques via a series of controlled experiments using a series of painted images of lilies by artists from the Cleveland Institute of Art. In order to simulate workshop methods and produce sufficient training data, the team created virtual patches in each of twelve paintings, three by each of four artists. After training and validation on two of the three paintings, testing on the remaining four paintings was carried out using machine learning methods.
As shown in the accompanying image, they were able to correctly attribute 98% of the patches, a significant result given that the patch size was a fraction of a complete brush stroke. The methods made it possible to confidently attribute brushwork even when the virtual patches were as small as a few bristle widths. These methods are now ready to be applied to the scans of paintings by El Greco and his workshop.
The implications of this project for the art world are wide-reaching and game-changing. Connoisseurs will soon have a new tool to assist with thorny attribution questions for many paintings. This project is one of several under the umbrella of art.lab.cle, all of which are transdisciplinary collaborations using 21st-century technology which will have a major impact on our understanding of art.
Previous
Scroll To Top