Rinpa is a style of Japanese art focused on abstracted natural motifs, often made with mineral
and metallic pigments as well as ink. Classical literature features in some Rinpa works.
Coined in the early 1900s, Rinpa means “Rin School,” after painter Ogata Kōrin (1658–1716),
whose work was important to the later transmission of the style, but Hon’ami Kōetsu (1558–
1637) and Tawaraya Sōtatsu (c.1570–c.1640) originated the style. They advocated for a return
to the ideals and aesthetics of the 1100s, when court culture thrived. Examine the evolution of
the style from its inception to its last exponents in the 20th century. 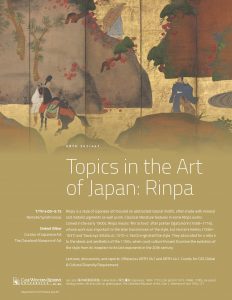