A fund named in honor of Sarah and Walter Gibson has been established to support doctoral students in the Joint Program between the Cleveland Museum of Art and the Department of Art History and Art. It will be initiated for the first time in September 2020.

Please see below for an Obituary for the Distinguished Professor Emeritus Gibson, who was a Chair and an important and beloved member of our Department. 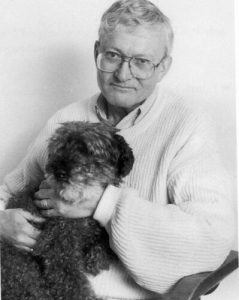 Born in Columbus, Ohio in 1932, Professor Gibson served in the army during the Korean War conflict and graduated from Ohio State University in 1957. Following graduate work at Harvard, he spent a year in Europe on a Fulbright scholarship doing research for his dissertation. Dr. Gibson was the Andrew W. Mellon Professor of the Humanities and chairman of the Department of Art History and Art at Case Western Reserve in Cleveland, Ohio and a Guggenheim Fellow.

In 1972, Dr. Gibson married the late Sarah Scott who ultimately became the head librarian at The Clark Art Institute in Williamstown, MA.  Upon relocating to New England, Dr. Gibson continued his scholarly research and served as visiting/adjunct professor at several colleges, including Williams College.

Renowned internationally as an authority on the 15th– and 16th– century Netherlandish and Flemish masters, Dr. Gibson authored many books and scholarly articles during his long career.  Among his most broadly studied artists were Hieronymus Bosch and Pieter Bruegel.

In recent years, Dr. Gibson donated much of his art history library to Williams College, the Clark Art Institute and Bard College.  He also gifted his extensive research, accumulated over the course of six decades, to the Rubenianum Museum in Antwerp, Belgium which has established the Walter S. Gibson Collection allowing future art historians to benefit from his scholarship.

In lieu of flowers and gifts, donations in Dr. Gibson’s memory may be made to the Clark Art Institute.