When the CMA’s textile conservator, Robin Hanson, unrolled a warm-toned textile with leaves, I was immediately intrigued. While I had been looking at other Swedish modern textiles for some time, I was struck by how different this design looked. The textile features a subdued color palette of golds, oranges, and greens with stylized leaves, all evoking autumn. 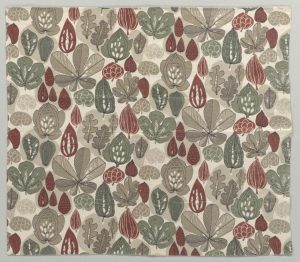 The other Swedish modern textiles I had researched were seemingly inspired by the vibrant Scandinavian summer months or Swedish cultural customs. These textiles, by such notable designers as Stig Lindberg or Gocken and Lisbet Jobs, were acquired by the museum in the 1950s. During this same period the CMA also acquired the unattributed textile of autumn leaves from Bonnier’s, a supplier of Scandinavian design based in New York. 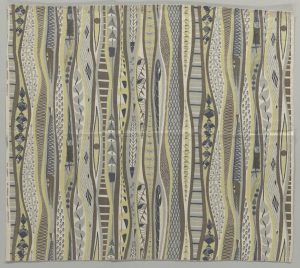 My goal soon became to track down a designer for this delightful autumn-themed pattern. However, after months of combing through monographic books on Swedish textile designers and attempting ill-fated image searches online, I had all but given up hope. As preparations ensued for Color and Comfort: Swedish Modern Design, attributing the design became less of a priority. Although the textile was slated to be included in the exhibition, I shifted my attention to reviewing primary sources to flesh out the show’s interpretive content. During this research, I suddenly stumbled upon a miraculous find tucked into a thick catalogue published in 1941 in Gothenburg, Sweden. In Elsa Gullberg’s section on “Inredningstextil”, or “Furnishings Textiles”, were two photographs of handprinted fabrics by the designer, Astrid Sampe. Although neither textile pattern is exactly the same as the CMA’s, both have striking similarities in the stylization of the leaves. 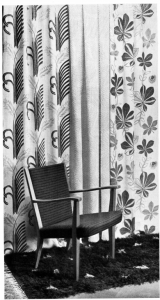 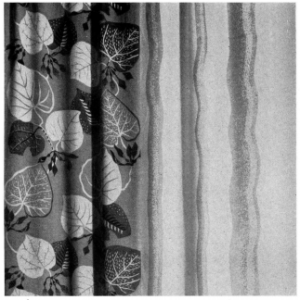 In research for the exhibition, I had learned that designers will often repeat certain stylistic motifs across a variety of patterns. Oftentimes, the subject would be altered only slightly, to give a fresh appearance to a tried-and-true motif. Since the designs from 1939 feature the same use of white-highlights and even a similarly constructed six-pronged leaf, I strongly suspect that the CMA’s textile was derived from Sampe’s hand. However, more research will be needed to definitively attribute the design to her.

With the textile possibly attributed to Astrid Sampe, an important gap was filled in the exhibition’s narrative on the history of Swedish Modern Design. Sampe was not only an innovative designer but was also the head of the textile department at Sweden’s largest department store, Nordiska Kompaniet (or NK). An intelligent woman with a vision for Swedish modern design, Sampe was instrumental in establishing business partnerships with American design firms, particularly Knoll Textiles. Through collaborating with Knoll, Sampe affectively introduced Swedish modern design to the American masses. The result was a craze for all things Scandinavian, which can still be felt today.